The Group of English Teachers decided to plan an activity called "Speakers' Corner" to motivate students to improve their speaking skill and promote interaction between different classes.

This activity was included in "Semana da Leitura" and was developed at the school playground under an olive tree.

Students from the 10th, 11th and 12th  grades should prepare a free topic in order to present it. 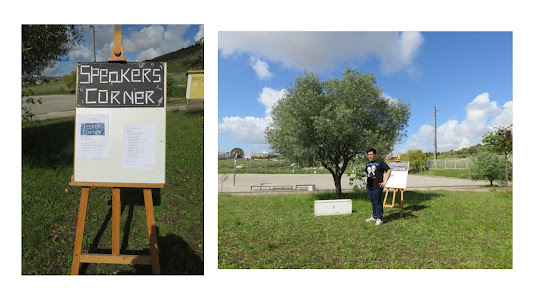 There were speakers  from the following classes:

The activity was hosted by João Domingos from 12.º 1.

After the opening session, a group of four students, André Cunha and João Domingos from 12.º 1 and Daniel Cardeal and David Gomes from 12.º 4, presented a short adaptation of “Hamilton the Musical”.

Then the speakers went up to the “podium” and SPOKE, confidently, audaciously, and openly.

A group of three students, Ana Watkins, Madalena Marianito from 11.º 2 and Daniel Cardeal from 12.º 4 closed the session with a surprising moment – singing a song.

The audience enjoyed it a lot.